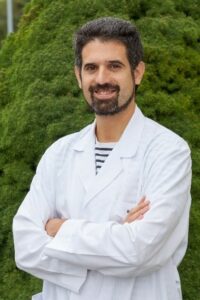 Biography
I obtained my PhD in 2009 at Cima Universidad de Navarra (Pamplona, Spain), centred on the use of adult stem cells for the treatment of myocardial infarction. After that, I employed 3 years in upscaling the therapy to a clinically relevant model in pig, and worked for deriving our first human induced pluripotent stem cell (hiPSC) lines and stablishing cardiac differentiation protocols. In 2012 I obtained a Ramón Areces Fellowship, followed by a prestigious Marie Skłodowska-Curie postdoctoral fellowship with which I was recruited and spent 4 years at the Stevens Group (Imperial College) in London (UK). During that stage I learnt the basic interdisciplinary principles of tissue engineering and working with biomaterials. After a short sabbatical, I returned to the University of Navarra to work under the lead of Prof Felipe Prósper and stablish the first Tissue Engineering group. I am currently PI of the Tissue Engineering lab and Coordinator of UNAV´s Regenerative Medicine Research Group. The work of my team is centred in mingling hiPSC-derived phenotypes, biomaterials and fabrication technology to advance in the generation of human mature cardiac tissues at the macro and micro scales for the development of new models and therapeutic applications for cardiac and other diseases.

Abstract
Cardiac diseases are the main cause of death worldwide, with myocardial infraction standing behind almost one-sixth of deceases. Current standard of care is based on pharmacological treatment to alleviate symptoms, but it is not curative, with patients finally faced with the dichotomy of transplant versus death. Although the dawn of the XXI century saw the rise of regenerative medicine based on stem cells as a solution to this dilemma, not even the breakthrough of reprogramming technology has delivered the expected results in the form of the generation of new therapeutic human myocardium. Cardiac tissue engineering, viewed as version 2.0 of regenerative medicine, is currently going down a similar path, with few trials being conducted in patients. BRAV3 is a H2020-funded initiative aiming at breaking this standstill by the interdisciplinary intermingling of the latest technology in medical devices, additive manufacturing, biomaterials and human induced pluripotent stem cells (hiPSCs), under the careful guidance of advanced computational modelling of a human-scale cardiac model (pig), to fabricate a mature biological ventricular assist device (BioVAD), able to provide functional support to damaged hearts. During this talk I will describe the motivation and structure of the project, as well as detail our progress during our initial 1.5 year journey.