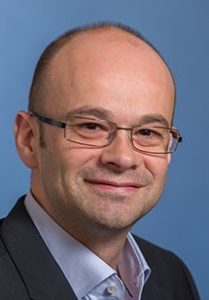 He completed his bachelor studies in Biology at the University of Aberystwyth in 1995. He then spent a year in Davos at AO Research Institute Davos where he completed his M Phil in Cartilage Biology. Between 1996–2000 he completed his doctoral thesis at the University of Nottingham in the field of Cancer Angiogenesis. He then returned to Switzerland to work in the Laboratory for Experimental Cartilage Research in Zürich, initially as a Post Doc and between 2003–2005 as Group Head. During that time, he also took a six-month sabbatical at the Centre for Molecular Orthopaedics, Harvard Medical School, Brigham and Women Hospital, Boston, to learn viral gene transfer techniques. In 2005 he returned to AO Research Institute Davos, where he became Principal Scientist and Focus Area Leader in 2009. He is a lecturer at the ETH Zürich and in 2015 he was awarded Professorship from the Medical Faculty of the Albert-Ludwigs University, Freiburg, Germany. In 2016 he was awarded an Honorary Professorship at the Institute for Science & Technology in Medicine University of Keele, UK. He is a fellow of the Royal Society of Biology and a fellow member of the International Cartilage Regeneration & Joint preservation Society. In 2020 he received the TERMIS-EU Mid-Term Career Award.

His main focus is the use of autologous MSCs and mechanoregulation for the repair of musculoskeletal tissues using a cell therapy approach. To this aim he investigates novel cell identification and isolation methods. His research interests include the mechano-regulation of progenitor cell fate, in particular chondrogenic differentiation. This has led to advances in regenerative rehabilitation and the discovery of novel clinically relevant biomarkers and targets. He is also interested in the mechanisms by which progenitor cells direct cell fate and interact with endogenous cells to effect a repair.

He is the author of over 130 scientific papers and book chapters, is the editor of two books and has 2 accepted patents.  He is the chair of the LearnORS Committee of the ORS, member of the TERMIS EU Meeting and Sponsorship Committee, member of the  International Consortium for Regenerative Rehabilitation  Leadership Council, and the deputy co-chair of the ICRS Basic Science Committee. He is an editor or associate editor for five journals, including Associate Editor, Frontiers in Bioengineering and Biotechnology and scientific editor for eCM Journal. He is the conference chair of the yearly eCM Conference.

Abstract
Due to life style changes and ageing of our industrialized nations, bone traumatic injuries and osteoporosis induced fragile fracture are an enormous medical and socio-economic challenge. State-of-the-art therapies have failed until now in keeping their promises of reliable bone regenerative solutions. The cmRNAbone project aim to create a novel bone regenerative therapeutic approach based on combination of chemically modified RNAs (cmRNAs)-vectors embedded in a 3D-printed guiding biomaterial ink tailored to patients need. To achieve our goal, sema3a, vegf, pdgf-bb and bmp7 cmRNAs targeting neurogenesis, vasculogenesis and osteogenesis will be synthesized, vectors based on lipids and polysaccharide nanocapsules for the delivery of cmRNAs will be developed. A functional Hyaluronan-Calcium Phosphate biomaterial ink that 1) can be loaded with cmRNAs-vectors and release them, 2) having intrinsic osteoinductivity and presenting laminin-derived peptides for guiding sensory neurons and endothelial cells ingrowth, and 3) being amenable to an extrusion-based 3D-bioprinting process will be formulated in conjunction to a 3Dprinter for fabrication of patient specific regenerative solution. In the following step, a large effort will focus on deciphering regenerative mechanisms and optimizing dosage and ratio of cmRNAs, loading of cmRNAs-vectors in the ink, 3D-printing, etc, to demonstrate regenerative capabilities in vitro and in vivo. Selected candidate formulations will be taken to clinically relevant preclinical proof of concepts. Finally, an overreaching effort on preparing a 1st in human trial will be taken, consisting on partners facilities auditing and clinical experts group support, etc, to ensure that GMP-like production for all regenerative tools, and regulatory and commercial strategies are realized.